- removing many moving parts currently in use, increasing reliability and efficiency, and/or

- replacing current configurations with very low efficiency, such as hydraulic systems, and/or

- achieving transmission cases which were considered to be impossible until now.


The first of them, named "EXTREME" (EXtreme Transmission Ratio Efficient MEchanism) for the convenience of this presentation, refers to a Mechanism that transmits power with a very high transmission ratio*, inserting ONE only additional moving part between its input and its output, while the patent application for it has already been published with the publication number: WO/2021/165707, receiving an excellent search report and written opinion. 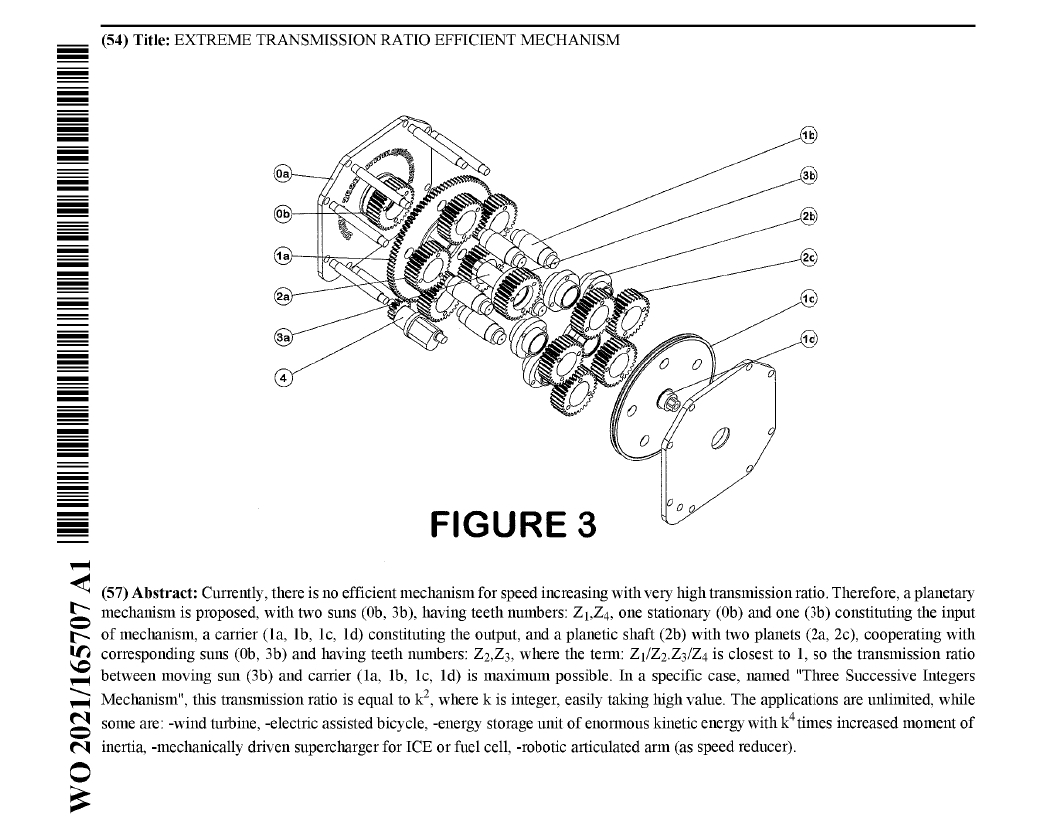 However, the GREAT CHALLENGE is the second Mechanism, named "ELEUTHERO" ("ELEUTHERO-STROPHE", that means an independently rotating hub, is the proposed full name for this brand new Mechanism) for the convenience of this presentation, referring to a configuration which transmits endless rotation from a shaft onto a stationary frame to a shaft onto an endlessly rotating carrier, or vice versa, PURELY MECHANICALLY and INDEPENDENTLY (KINEMATICALLY and DYNAMICALLY) of the rotation of the carrier, inserting THREE only additional moving parts between its input and its output.

The patent application for this Mechanism has just been published with the publication number: WO/2021/260400, receiving an excellent search report and written opinion, as well. 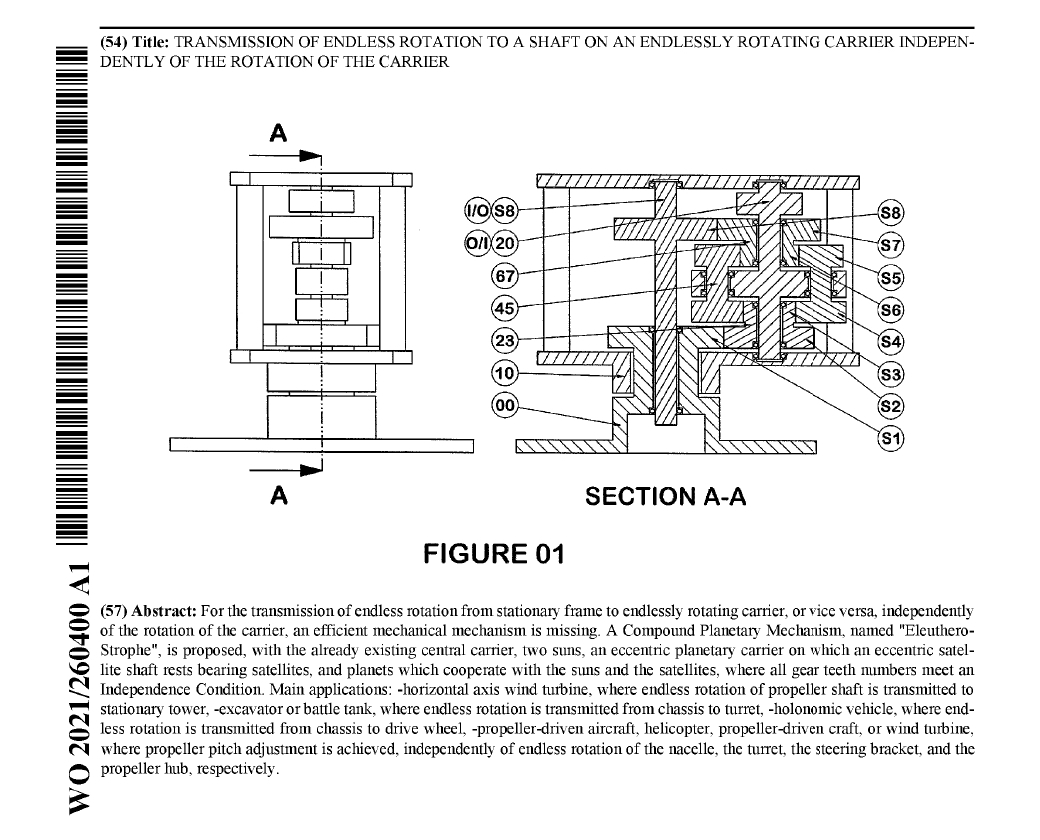 The "ELEUTHERO" has a similar structural concept as the "EXTREME" and -which is more important- it can be perfectly combined with it, so as to achieve an INDEPENDENT POWER TRANSMISSION with a VERY HIGH TRANSMISSION RATIO.


MORE FOR THIS MAGIC HOLY GRAIL OF MECHANICS: ELEUTHERO

There are plenty of applications for both these Mechanisms, while examples for the most significant ones are:


APPLICATION ON A WIND TURBINE 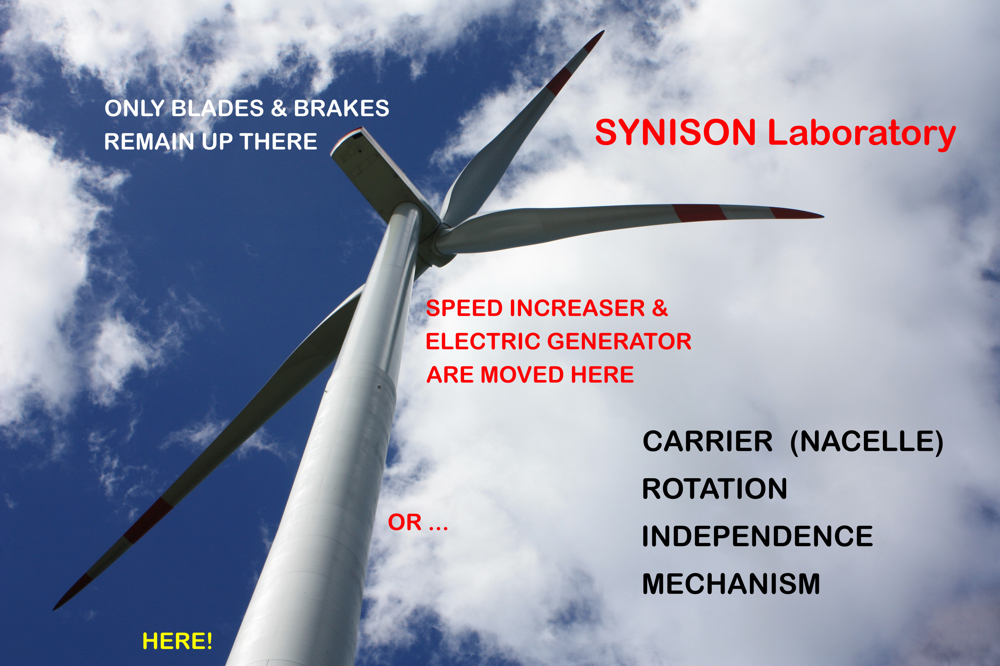 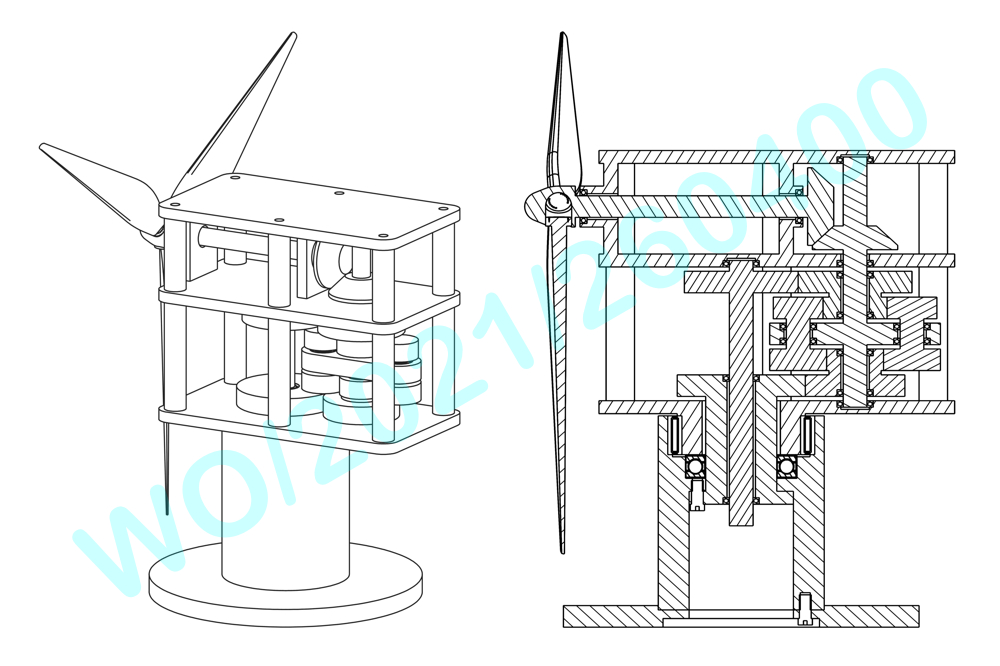 MORE FOR THE APPLICATION ON A WIND TURBINE

APPLICATION ON A TURRET-CARRYING VEHICLE

- on a turret-carrying excavator or a crane or a battle tank, using the "ELEUTHERO" in order to transmit endless rotation from the chassis to the turret independently of the rotation of the turret, and achieving at the same time any required transmission ratio, using the "EXTREME" within the same Mechanism with FOUR only additional moving parts in total; among the many advantages of having the engine on the chassis and the hydraulic pump on the turret, is the pure mechanical transmission for the movement of the vehicle, per se, in space, instead of the hydraulic transmission currently in use, the unlimited (purely endless) rotation of the turret with respect to the chassis and the lowering of the center of gravity: 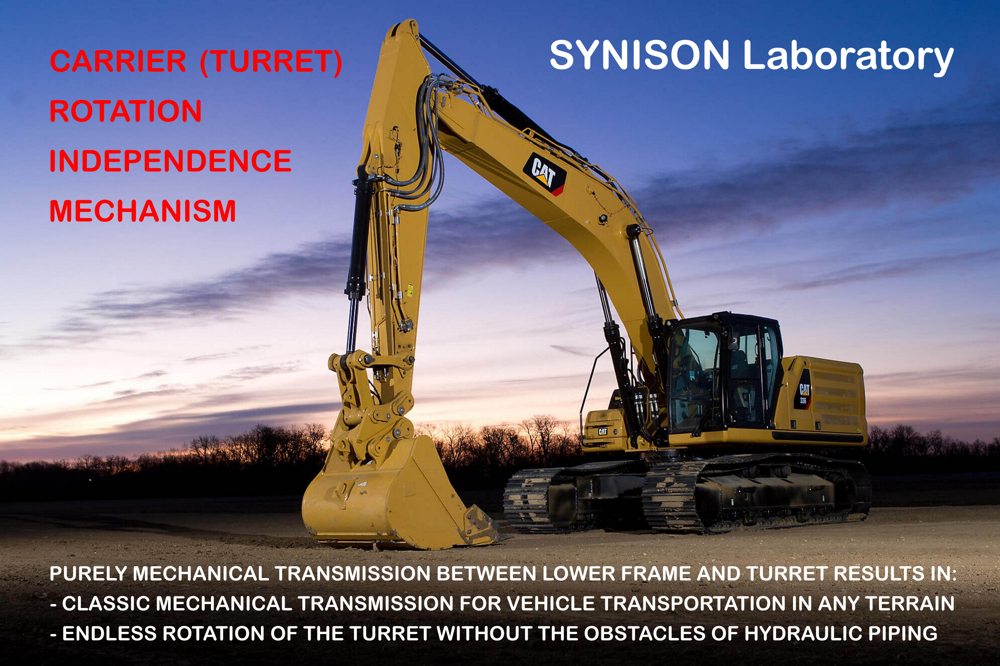 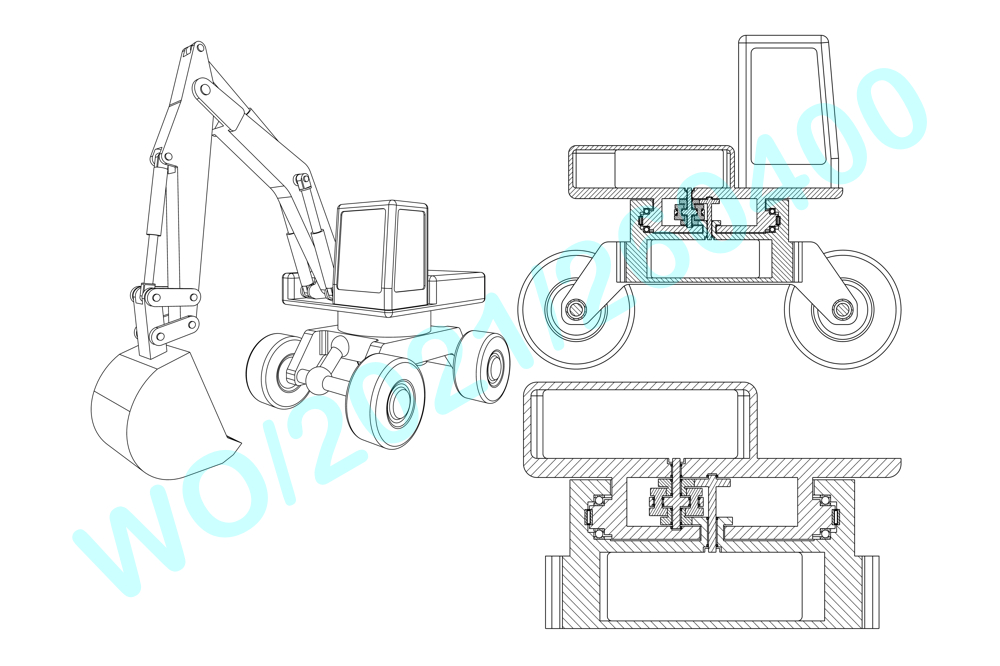 MORE FOR THE APPLICATION ON A TURRET-CARRYING VEHICLE

APPLICATION ON A STEERING BRACKET OF A VEHICLE

- on the steering bracket of a vehicle, using the "ELEUTHERO"; and it is obvious what a wild thing is A WHEEL THAT PROPELS AND STEERS AT THE SAME TIME (via robust gears instead of the delicate balls of the current constant-velocity joint) for any vehicle, especially for a 8x8x8 or 6x6x6 military or fire-fighting vehicle with very high ground clearance, or even for a 4x4x2 SUV or super-car or a simple 4x2x2 family or smaller car, achieving at the same time any required transmission ratio, using the "EXTREME" within the same Mechanism with FOUR only additional moving parts in total: 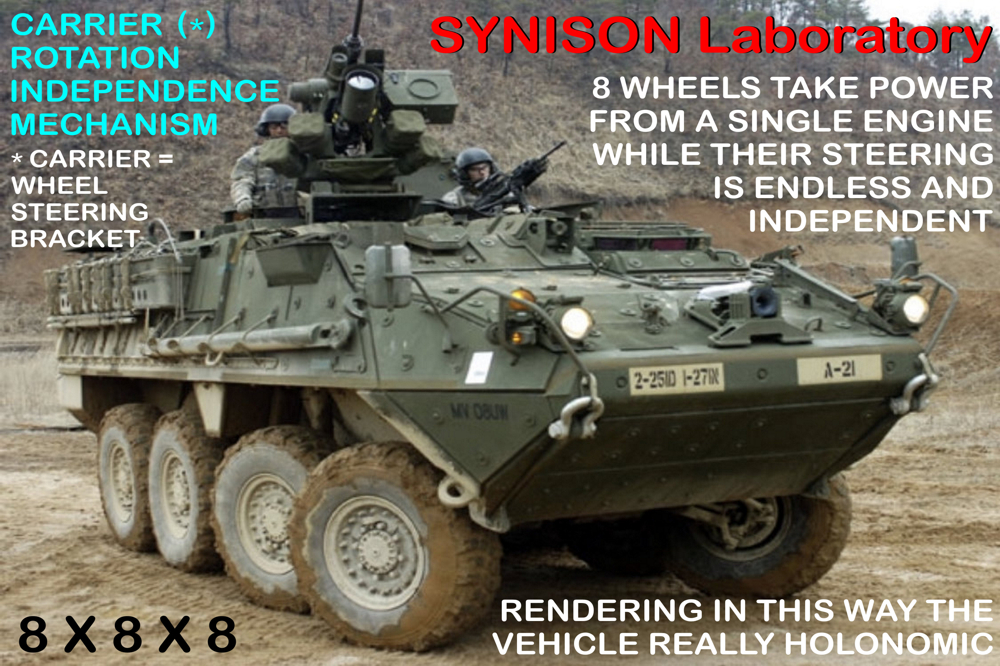 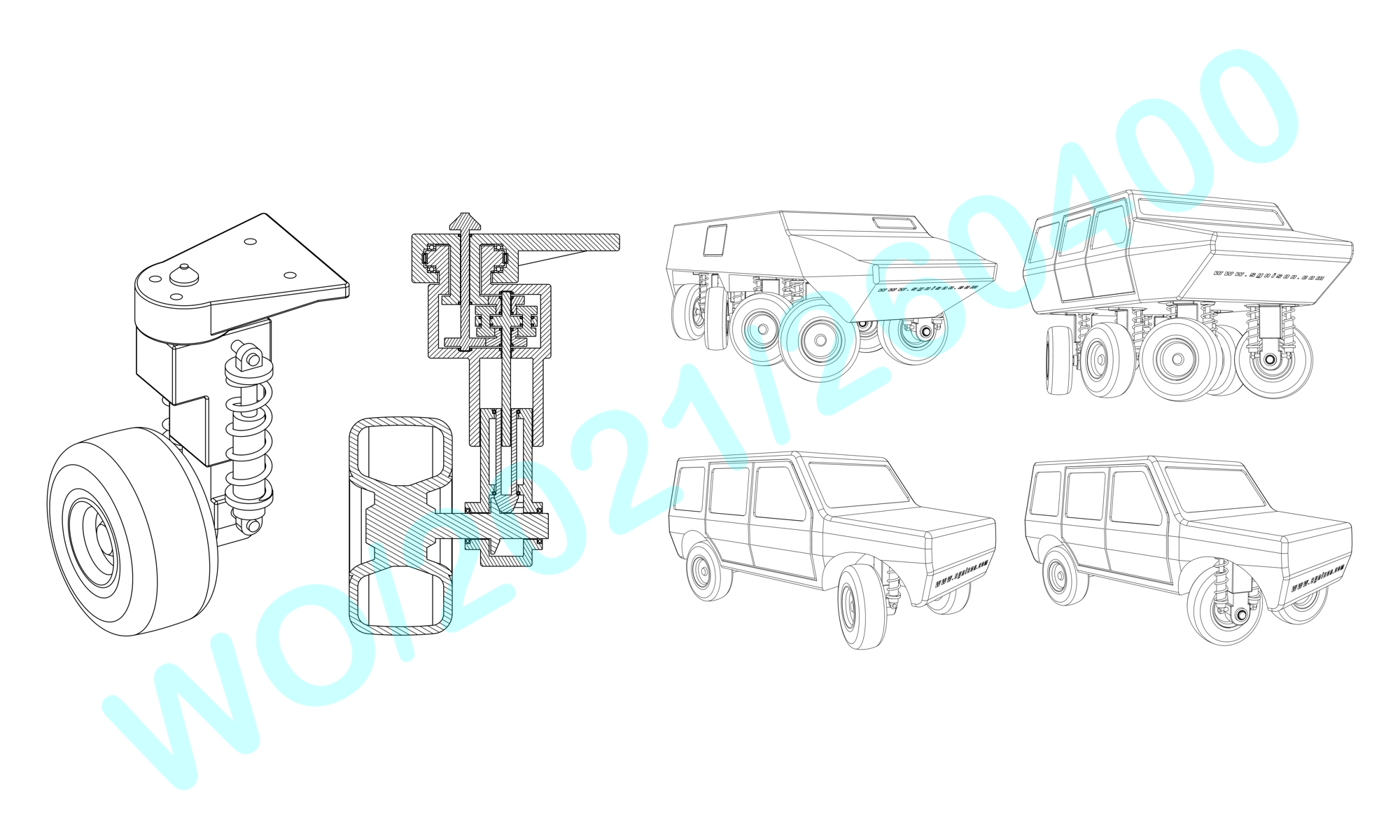 MORE FOR THE APPLICATION ON A STEERING BRACKET OF A VEHICLE

APPLICATION ON AN AZIMUTH POD DRIVE OF A VESSEL

- on the steering bracket of an azimuth pod drive of a vessel, using the "ELEUTHERO" in order to transmit power from the shaft of the engine onto the vessel to the propeller shaft, absolutely independently of the ENDLESS rotation of the steering bracket, achieving at the same time any required transmission ratio, using the "EXTREME" within the same Mechanism, with FOUR only moving parts between the engine shaft and the propeller shaft: 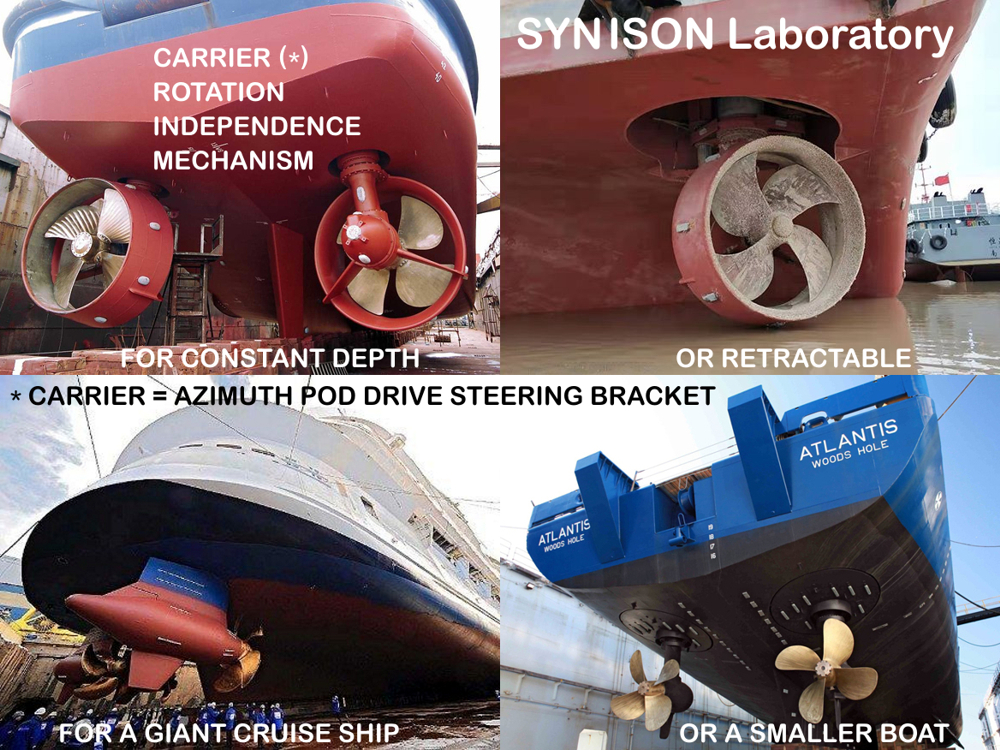 MORE FOR THE APPLICATION ON AN AZIMUTH THRUSTER OF A VESSEL 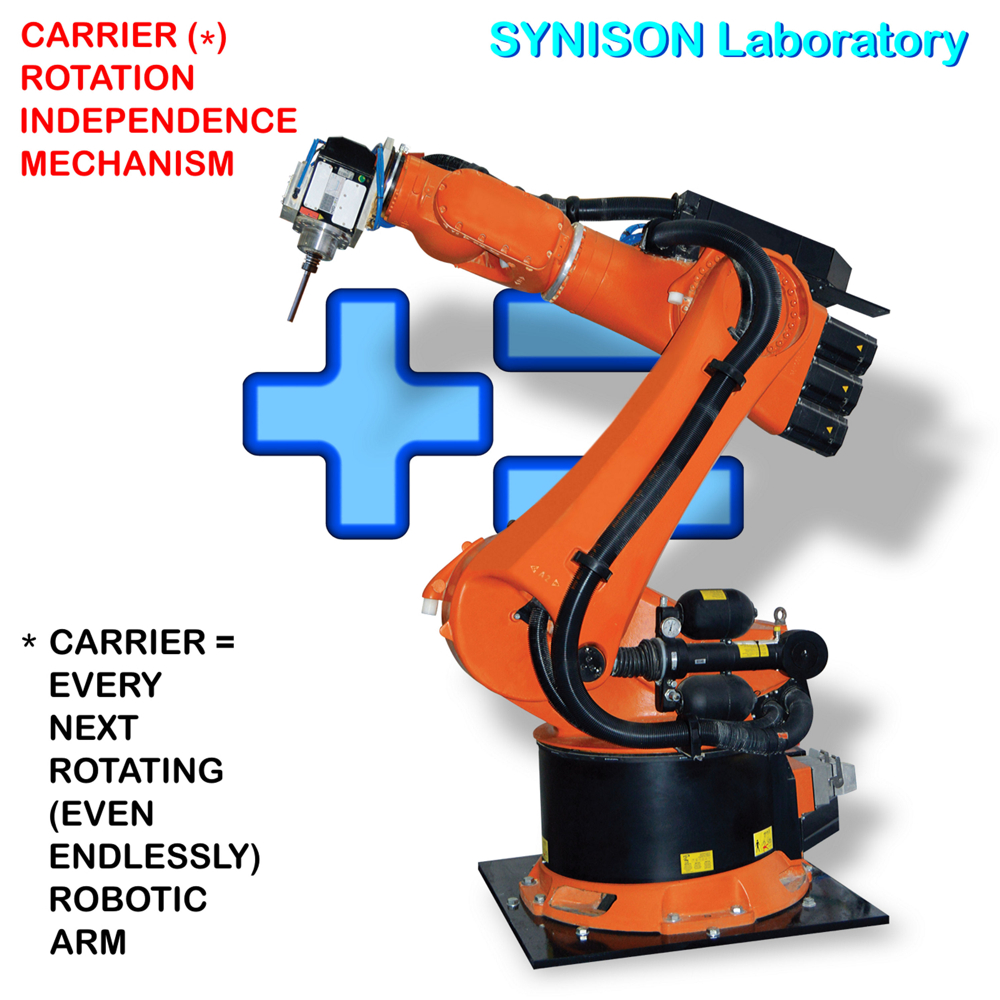 APPLICATION ON A PROPELLER HUB TO ADJUST THE PROPELLER PITCH

- on the rotating propeller-hub of a helicopter or other propeller-powered craft, on air or water, or even of a wind turbine (see all the related Drawings of the PCT application), using the "ELEUTHERO" in order to adjust their propeller or blade pitch, via the most compact and robust way, even with an endless angular travel of the final actuator with everything which this entails: 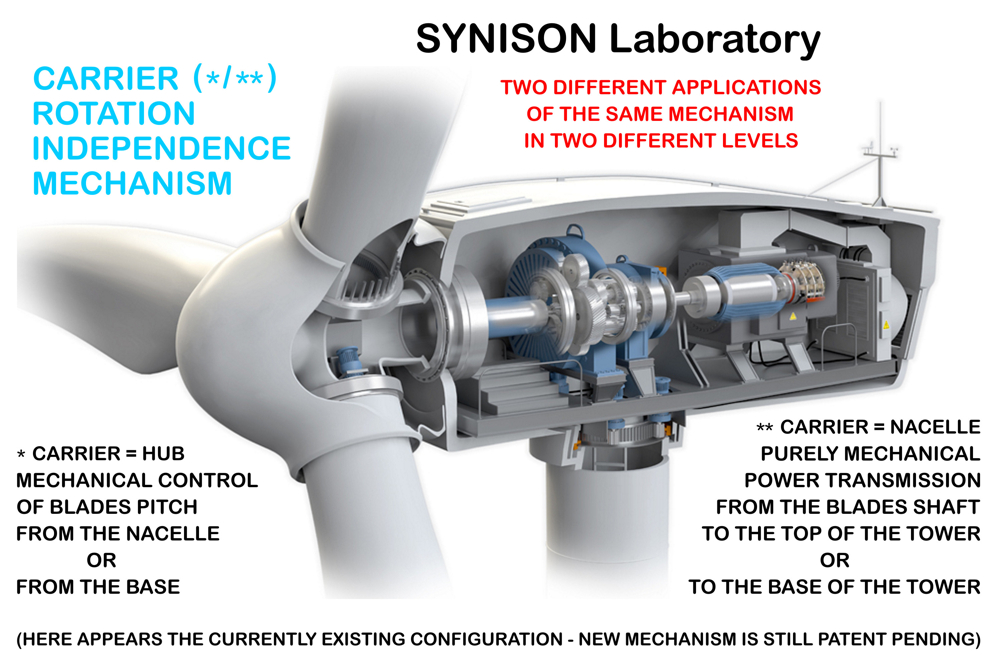 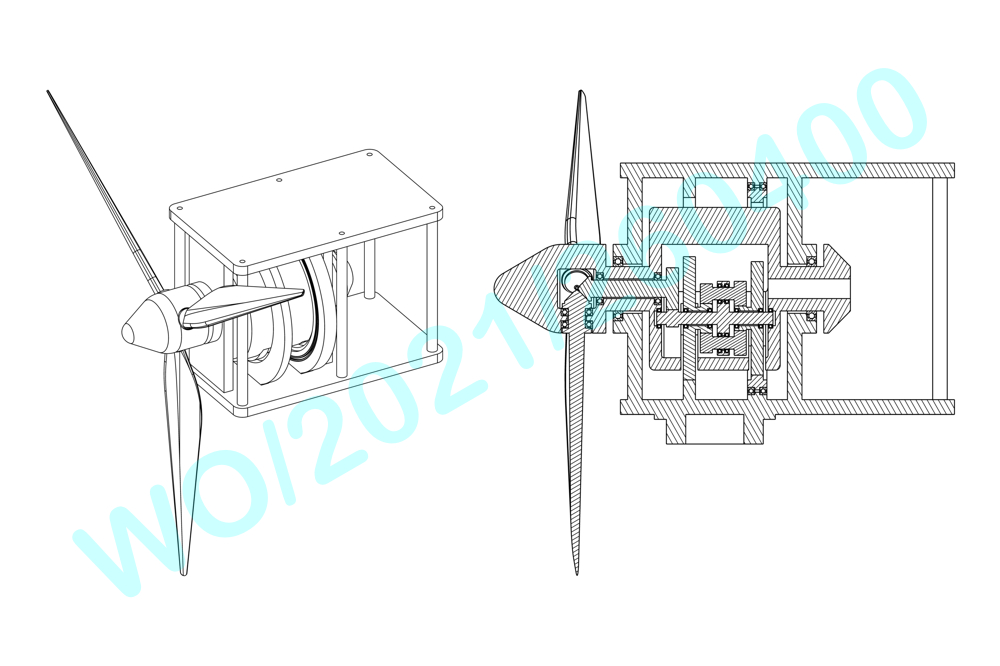 APPLICATION ON AN ELECTRIC MOTOR 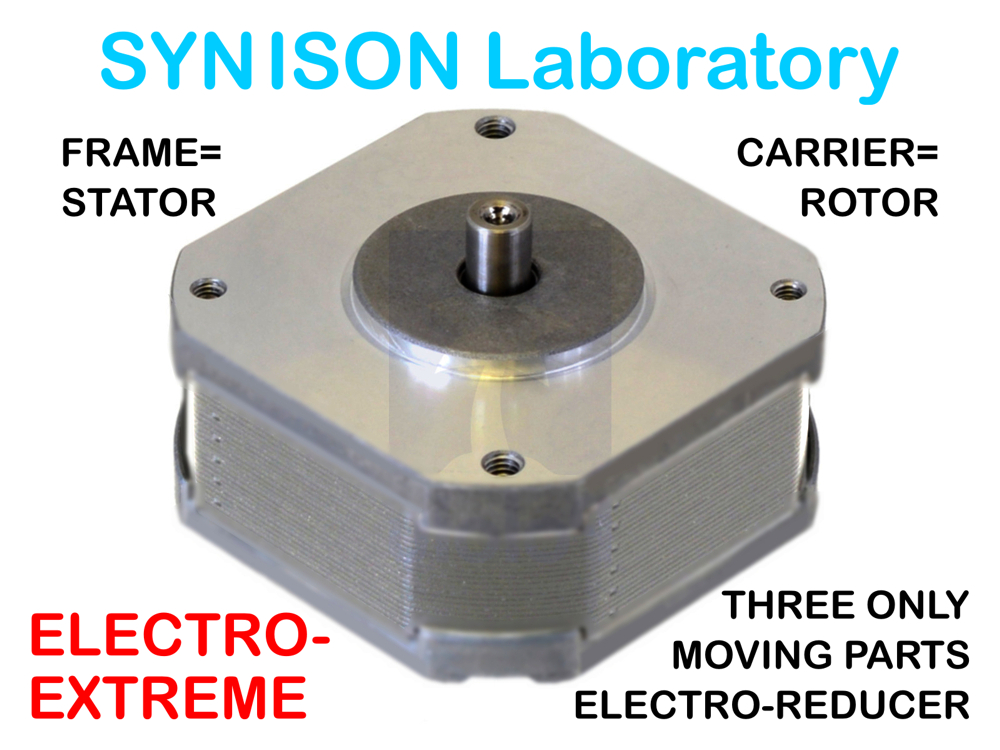 APPLICATION ON A SINGLE-AXIS SOLAR TRACKER

- on a single-axis solar tracker, for photovoltaic panels or other similar applications, using the "EXTREME", in order to reduce the speed of a usual electric motor with the lower possible power, from a speed of 2,000 RPM for instance, to 1/1,440 RPM (one cycle per day), achieving a transmission ratio of 1:2,880,000: 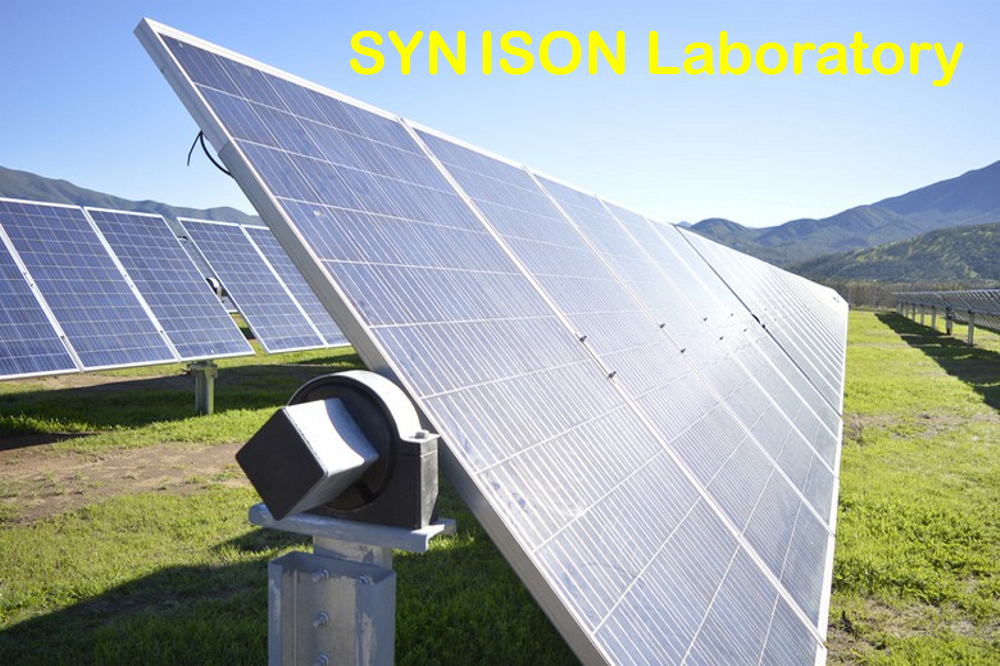 These MECHANISMS are Patent Pending
and until the next phase of their publication this website is under construction;
so, if you want more information, please, write directly to the address: